The Sin in the Sisterhood

A body disguised as a scarecrow is found with a bullet wound in a remote cornfield, and the team is forced to work against the clock to avoid a storm and potential complications that would affect the evidence. Booth and Brennan interrogate the victim’s three wives, who are also sisters, and learn that jealousy between the sisters and their desire for their husband’s attention had caused a major rift in the family. Booth and Brennan also question one relative who disapproved of the victim’s polygamy. Meanwhile, Cam loses confidence in her relationship with her on-call doctor boyfriend, but they both realize they need to make their relationship a priority. 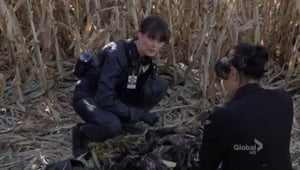