The Maggots in the Meathead

When Booth and Brennan are called to investigate decomposed remains found at the Jersey Shore, the team IDs the victim as Richie “The V” Genaro, a 23-year-old who partied the night before at a popular nightclub. Booth and Brennan question Genaro’s peers and the club bouncer, and Brennan surprisingly proves her pop culture savvy and anthropological expertise after watching what she believes to be a documentary on the inhabitants of the Jersey Shore, but was in actuality a reality show set there. Meanwhile, at the lab, the team grows fond of Booth’s girlfriend, Hannah, and Angela tries to keep her pregnancy a secret. 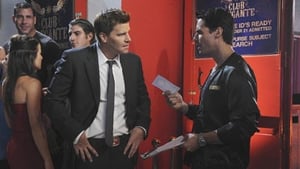