CeCe and Rocky go to entertain the elderly at a retirement home, but one of them dislikes Rocky. Rocky tries to get the lady to be nice to her, but it doesn’t work. CeCe tries to convince Rocky to ingest energy drinks that have more caffeine than three cups of coffee, but CeCe doesn’t care. Flynn drinks them instead and the girls get tired of trying to calm him down all night. The girls also get light-up clothing from Deuce, who wants them to advertise the clothing. CeCe and Rocky then dance on the show, but when Ty gets a mistake of paying on twenty bucks to donate, he tries to stop them from dancing. The girls are then in the final battle against Gunther and Tinka, but the twins fall down as the light-up clothing repeatedly shocks the girls. Gary then announces that CeCe and Rocky are the last one standing, but they fall asleep as soon as Gary says they have a spotlight dance. 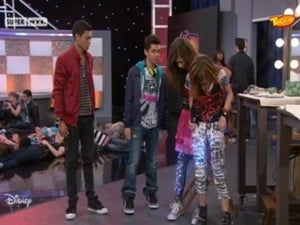