Copy Kat It Up

When an uber fan named Kat starts to copy Cece’s appearance and secretly plots to take her place on “Shake It Up, Chicago,” Cece and Rocky must find a way to show Kat’s true colors. Before they perform, Kat texted Cece (pretended to be Rocky) and said to go get your costume across town. When she comes back, Kat and Rocky are performing and she wrecks Kat’s and Rocky’s performance. To get payback, Cece poses as Shake It Up! New York and over email, she tells Kat that she is going to Shake It Up! New York, which was fake. Meanwhile, Flynn acts as Ty’s recording agent when dealing with a big time record producer. Ty figures it’s for stupid people who can’t tie their shoes and quits, so Flynn takes over and becomes a hit, and Ty regrets quitting. 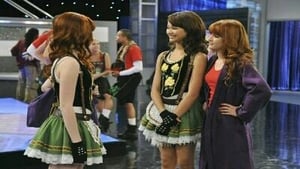