When Gunther and Tinka refuse to pay Rocky and CeCe their money for performing at Klaus’s party, the girls take their case to “Teen Court”. Gunther and Tinka believe Rocky and CeCe didn’t perform as well as they should and claim that they’re the ones that ruined Klaus’s party. Gunther and Tinka also claim that they ate all the cake and yelled at Klaus. Rocky and CeCe however think Gunther and Tinka ruined the party because they believe its their fault for being so harsh on Klaus. Rocky and CeCe also claim that Tinka smashed the cake in Klaus’s face. As soon as Judge Marsha was about to close the case, Deuce comes running in with a surveillance video from Crusty’s. The video showed that it was actually all of them who ruined Klaus’s party, after smacking his birthday cake out of his hand by an accident. Later, Gunther and Tinka paid back the money to Rocky and CeCe, as they promised, but with a slight catch. Just like the time that they paid Rocky and CeCe back with sequence, this time, they paid them back with pennies. Meanwhile, Henry wants to teach Flynn how to ride a bike after finding out that he doesn’t know how to ride one. Flynn is reluctant at first, but then, he sees how useful it is, and he wants to ride a bike. Then, Flynn finds out that Henry tricked him into thinking that he rode the bike all along, but Henry actually rigged the bike so Flynn wouldn’t fall off of it. 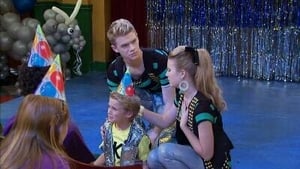