Parent Trap It Up

When Rocky is convinced that CeCe’s dad is trying to “woo” CeCe’s mom, she tries to plan their relationship relating to her book. CeCe doesn’t believe it at first, but when she picks up her dad’s coat, she finds a ring, leading both the girls to thinking he is going to propose to CeCe’s mom. With the help of school librarian Miss Burke, they come up with a plan to go to the “Shake It Up, Chicago!” set and remake CeCe’s parents’s first date with a “Bollywood” theme. After the dance, the girls find out that CeCe’s dad isn’t proposing to her mom, but instead to her dad’s girlfriend, who lives back in Florida. Later Rocky feels a little guilty for not knowing about Cece’s Dad’s girlfriend and apologizes to CeCe. Meanwhile, Ty and Deuce try to go on a double date at Crusty’s, only to find out that Dina and Gina had a long lasting rivalry since they were both little. Later, Ty and Deuce confront them by saying that they are always competing against each other and they are annoyed by the fact they pulled them into the “competition”. Soon, Dina and Gina realize their mistakes and become friends. 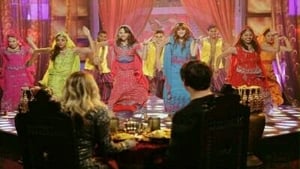