Shake It Up, Up and Away

CeCe and Rocky plan to go to Alabama with the rest of the show, but CeCe tricks Rocky into getting on a bus to Los Angeles in order to audition for a reality show, and they get stuck at a bus station in a small Texas town. After the mayor sees the girls dance at a Town Hall party, he asks if they want to dance for the town’s air-show. However, they find out they will be dancing on the wing of a World War I plane while in the air. Flynn stows away in CeCe’s suitcase on the trip and Deuce and Ty compete for a job at Deuce’s uncle’s pizza place. 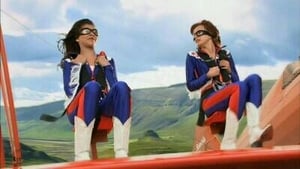